Following up with Jack

I was reading another blog today from another heart mom and started to feel guilty that I have not posted in such a long time. I do post a lot on Facebook on how jack is doing but I have been asked a lot from people how Jack is doing by people who are not on Facebook. I have even been asked if something really bad has happened to Jack and thats why there are no more blog posts. After that question,  I decided maybe I should get back on the blog to let you all know how great Jack is doing these days.
Since Jacks last surgery in March, he has had quite the battle with fluid in his lungs. Jack ended up back in the hospital shortly after being discharged for the dreaded Chylos Fluid that he had battled after his second surgery. We kind of expected that Jack would get this fluid again because he had it before, but this time was pretty bad. He was admitted early April with fluid in his lungs in the amount of 750mls. That is about 25 ounces of fluid (imagine of 3 cans of soda just sitting in his lungs). Basically he was drowning. They had to put a small tube into his chest to drain the fluid and he had to remain on watch for about 2 weeks at the hospital. It was a pretty scary moment going back into Childrens with a child fighting for air and turning blue right in front of my eyes. Thank goodness it was caught in time. Since then, Jack was put on a low fat diet,  lasix (meds to keep fluid down), and we had to go for a weekly xray to keep an eye on any fluid. This went on all summer and into fall. Then because the fluid just wasn't getting better he had to go in for another heart catherization... that would be his 9th one. In the cath, they were able to coil off unneccesary veins that could be causing high pressures in his lungs, that would also be causing some of his fluid issue. It was a rough cath for Jack, probably the worst recovery after a cath I have seen him go through. But with in a week he was back to hiself.  Just recently Jack was able to come off the meds and we have had a 3 week wait period to get another xray, which is tomorrow. We are hoping for a nice clear xray since being off the medication. It would also be so nice to nix the xrays all together. It is not an easy trip for Jack. Basically this kid has had enough. My only bribe in  the hospital is the big fun animal shaped cookies they sell in the lobby that he isn't even supposed to have because of his diet! But it is pretty sad when your 2 year old knows when you are on the road leading into the hospital too... starts crying at that point until we hit the cookies!
Jack seems to be doing good now! He has a lot of energy and a lot of spunk which is really nice to see. I enrolled him in a Pre-pre K class that he absolutely loves. It is a great experience for him to interact with other kids and just play like a normal little boy. Recently we had our big interview with Millbury public schools to set up an evaluation to see if we can start Jack in real Pre-K this spring. It all will depend on if he is delayed or not. If so, they will take him right when he turns three in the spring. If he is not delayed we will have to wait till fall. I have to say though, Jack is no where near delayed. Although school for him in the sprind sounds soooooo good to this mamma, I am proud of his achievements and if he has to wait until fall that is really a good thing. We were told in the beginning that for every day Jack is in the hospital would lead to one week of being delayed (he has been admitted total of 8 months of his life).NOPE- Not my Jack. Jack can count to 20, count objects, knows his alphabet, knows all his shapes and colors, and talks very well... heck, he reads license plates in the parking lots. He can use the ipad better than me! Sorry if I am bragging, but it truly is becausee I am just plain ole PROUD of who he has become with all that he has been through.
Jack is going to be a big brother in February. Not really sure how this will all turn out but he seems to be ok with it now. Most of the time when I ask him what is in my belly, he refers to it as a baby... sometimes its an animal of some sort, like a horse! One day Thomas the train was in my belly. It is really amusing to hear what he comes up with. This kid has character and we love it. So hard to get mad at him with his big blue eyes and a smitten grin. He still has this mamma wrapped around that little finger but I love it! So I will keep you posted on results for tomorrows xray and try to be a lot better about getting on this blog! To those of you keeping up with Jack, I really appreciate it!!
Posted by Chrissy Buckley at 11:21 AM 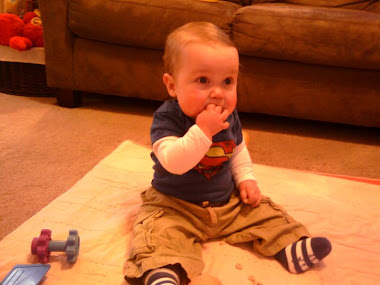 Dragon tales and the "water is wide"

The rocket racer's all tuckered out

Superman's in pajamas on the couch

Goodnight moon, will find the mouse

God bless dad and thanks for the stars

God hears "Amen," wherever we are 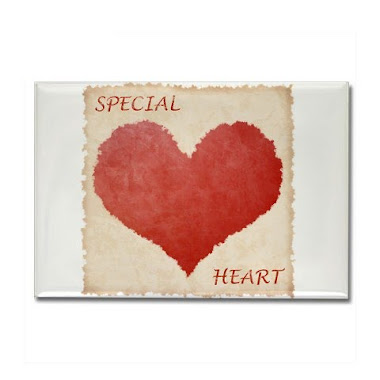 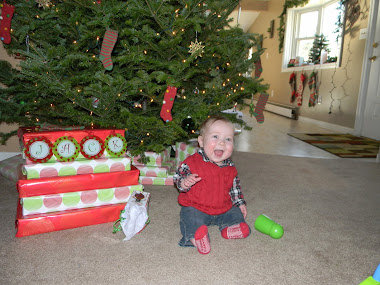 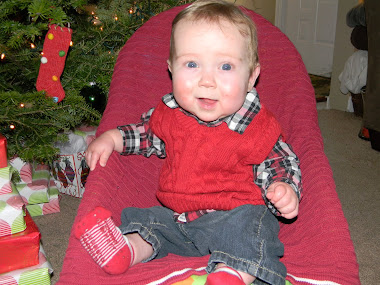 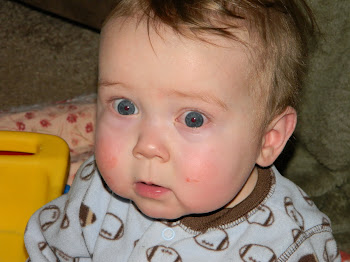 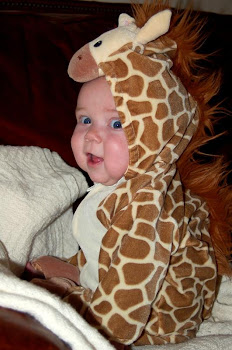 Here is something I found on another heart mom's website... so true!

What does it mean to be the parent of a child with a heart defect? It means going into your baby’s room a dozen times a night just to check to see if he’s still breathing. It means standing over the crib to watch the chest rise and fall and when you don’t see it move, you begin to panic and put your head down close to your baby’s face to try and hear him breathe. It means that when you don’t see the chest move and you don’t hear him breathing (because your own heart’s beating is drowning out any other sound in the room), you put your finger under the baby’s nose to feel the air on your finger – until you wake the baby and it stirs – and you’re thankful, so thankful that he’s still with you. It means feeling a huge sense of relief when he hears you and opens his eyes and smiles. It means saying a prayer of thanks for another day. It means measuring out his medication and panicking if he spits some of it out. How much did he spit out? One cc? Two or three? Then wondering if you should guesstimate how much more he should have and if you’d overmedicate him. It means checking his nail beds against your own to determine how blue he is today. It means asking your husband, your mother, or your sister, “Do his lips look blue to you?” It means snuggling him in an extra blanket for fear he won’t be warm enough. It means worrying that even a sniffle could cause an infection that could harm his heart. It means taking your baby to the doctor and worrying that he will catch something in the waiting room, so you walk back and forth in the corridor until the nurse calls his name and takes you straight back to the examination room. It means knowing that everyday is a blessing and a gift. It means knowing that you are the luckiest person in the world, just to be a parent. It means cherishing every moment, every breath with such intensity that you feel tears come to your eyes for no apparent reason. It means praying for a miracle to save your baby’s life. It means praying your marriage is strong enough to endure the hospitalizations, separations, and grief. It means praying for the will to live, even if your baby doesn’t. It means your own heart knows a pain, no parent should know. It means feeling weak, helpless, angry, and depressed because your child’s fate is out of your hands. It means feeling strong, determined, and brave because you know you have to be. It means your love knows new unlimited boundaries. It means your pride in your child’s accomplishments is unparalleled. It means your pain has taught you a deeper sense of compassion than you ever imagined. It means we are all united by the same feelings.

This is my wish for you:

Comfort on difficult days, smiles when sadness intrudes, rainbows to follow the clouds, laughter to kiss your lips, sunsets to warm your heart, hugs when spirits sag, beauty for your eyes to see, friendships to brighten your being, faith so that you can believe, confidence for when you doubt, courage to know yourself, patience to accept the truth, Love to complete your life.